Dredging Was the Success EPA and State Envisioned

February 2019 ‚Äî Dredging is achieving the goals EPA and New York State sought. The proof is in the 99.8 percent of sediment samples collected by New York State that achieved EPA‚Äôs cleanup standard, writes John Haggard of GE who oversaw the project. Read the letter in the Albany Times Union here. 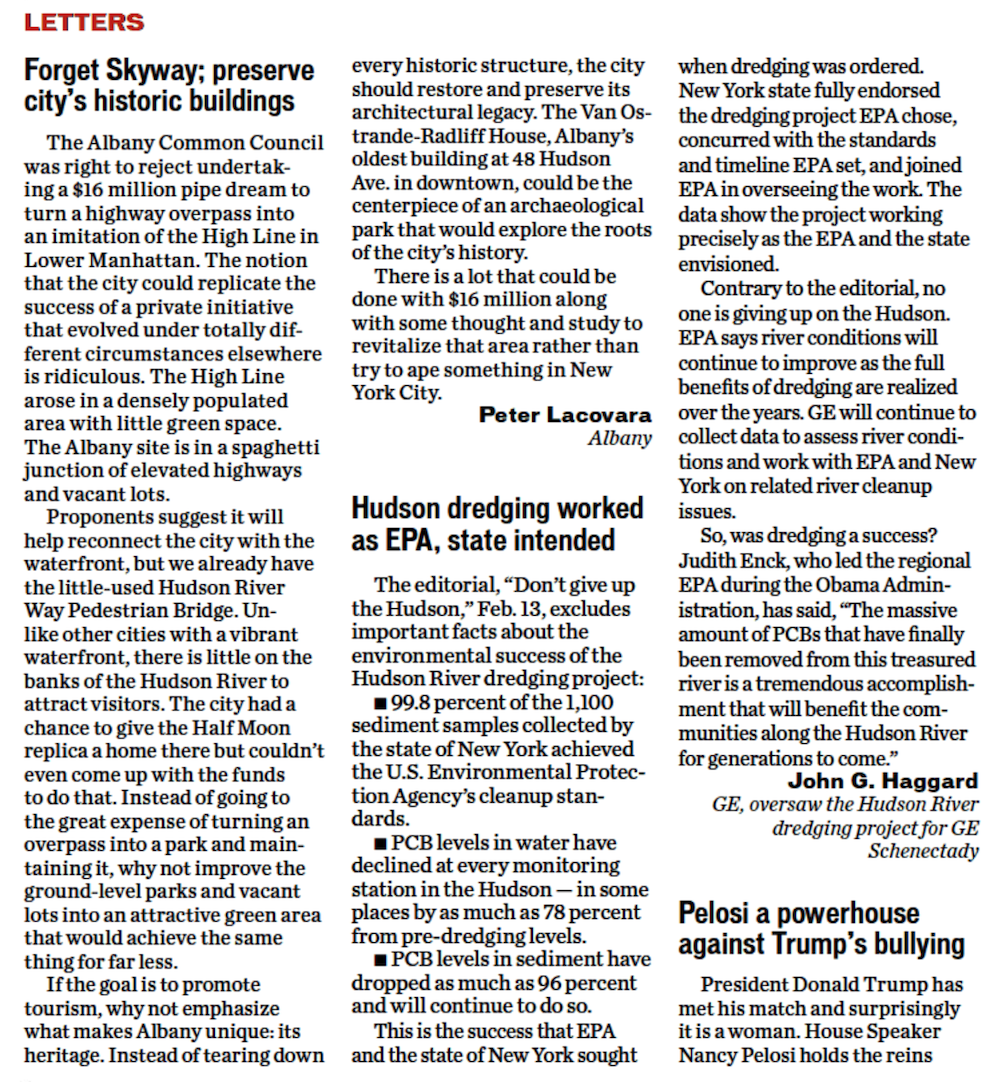 January 2018 ‚Äî The U.S. Environmental Protection Agency has indicated it will delay the final publication of its Five Year Review Report, and let pass a deadline on issuing a certificate of completion.

As EPA confirmed in a report last May, and as the data clearly and unequivocally demonstrate, the Hudson River dredging project is achieving EPA‚Äôs goals of protecting public health and the environment. The dredging project removed the vast majority of PCBs in the Upper Hudson, as the agency had directed, and PCBs levels in water declined sharply as expected.

GE has met or exceeded all of its obligations on the Hudson River, removed twice the volume of PCBs that EPA anticipated, and invested $1.7 billion in what EPA called a ‚Äúhistoric achievement.‚Äù‚Äô

While we will continue to cooperate with EPA, New York State, and other interested parties on the floodplains work and other Hudson River environmental projects, we believe the facts clearly warrant a certificate of completion of the dredging project.

November 2017 ‚Äî GE has responded to New York State‚Äôs call for more dredging of the Hudson River. GE successfully completed the massive dredging project in 2015, having invested $1.7 billion, having removed all of the PCBs that EPA targeted for removal, and having met all of its commitments to EPA and New York State. New York State played an instrumental role in every major decision related to the dredging project and approved and oversaw the work and does not dispute that GE met all of its commitments.

September 2017 ‚Äî GE submitted its comments on EPA‚Äôs Five Year Review Report noting ‚ÄúEPA selected and GE successfully implemented a dredging remedy that was determined to be protective of human health and the environment and that was endorsed by New York State and the environmental advocacy groups.

A Review of the Progress on the Hudson

August 2017 ‚Äî Data collected and analyzed since the completion of dredging in 2015 show PCB levels in water have declined at every location where samples were collected.

June 1, 2017 ‚Äî The U.S. Environmental Protection Agency issued its Five Year Review report that concludes the Hudson River dredging project significantly reduced PCB levels and is achieving the environmental improvements that EPA envisioned. EPA said the dredging remedy is functioning as intended and will be protective of human health and the environment. No additional dredging in the Upper or Lower Hudson is recommended.

GE is continuing to support the ongoing assessment of environmental conditions in the river and working closely with EPA, New York State, local communities and others committed to the goal of a cleaner Hudson.

November 12, 2015 -- After considering public input, the EPA has approved a plan that outlines the multi-step process General Electric (GE) will follow to dismantle and decontaminate the 110 acre PCB sediment processing facility that was built to support the dredging of the Hudson River PCBs Superfund Site. The plan, called the Processing Facility Demobilization and Restoration Plan, is required by the 2006 legal agreement between GE and the EPA for the dredging work. The EPA will oversee GE‚Äôs performance of the work required by the plan.

Backfilling of previously dredged areas with clean material was completed earlier this week. The processing facility will continue to load railcars until all dredged material has been transported off site, which is expected to occur by the end of the year.

FAIRFIELD, Conn. ‚Äî October 5, 2015 ‚Äî GE [NYSE: GE] today announced it has completed dredging in New York‚Äôs Upper Hudson River. Since 2009, GE has removed the majority of PCBs from the Upper Hudson River in one of the largest and most successful environmental cleanup projects ever undertaken in the United States. The U.S. Environmental Protection Agency (EPA) has called the project an historic achievement that protected the environment and human health. GE‚Äôs crews removed more than 300,000 pounds of PCBs from the river ‚Äì more than twice as much as had been anticipated.

‚ÄúThirteen years ago, I committed GE to undertaking an environmental dredging project of a size, scope and complexity that had not been attempted before,‚Äù said GE Chairman and CEO Jeff Immelt. ‚ÄúOur goal was to perform this work as safely and effectively as possible in full compliance with the rigorous standards and timetable set by EPA. We brought world-class GE engineering and technology to the task, and we met every obligation on the Hudson, and will continue to do so. I am proud of the work of our GE team and confident that the dredging project will benefit the Hudson for generations to come.‚Äù

‚ÄúThis project took seven years to design and six more to complete,‚Äù said Ann Klee, GE‚Äôs vice president of Global Operations ‚Äî Environment, Health and Safety. ‚ÄúOur team of environmental engineers and dredging experts and our contractors worked around the clock to successfully achieve the goals of the project while minimizing to the greatest possible extent impacts on the river and local communities. We could not have completed this project without the steadfast cooperation of local communities, property owners and residents of the Upper Hudson and our strong working relationship with EPA, the New York State Department of Environmental Conservation and the New York State Canal Corporation.‚Äù

October 1, 2015 ‚Äî Within days, GE will finish removing the majority of PCBs from the Upper Hudson River in one of the largest and most successful cleanups ever undertaken in the United States.

The U.S. Environmental Protection Agency, which ordered and has overseen every aspect of the project, has pronounced it ‚Äúenormously successful‚Äù and a national model.

GE did not determine the size and scope of this project. The company‚Äôs responsibility was to conduct the project EPA selected ‚Äì and we have done so exceptionally well.

EPA has determined no further dredging is necessary because the dredging project is achieving the goals of protecting public health and the environment.

July 24, 2015 ‚Äì This fall, GE will finish removing the majority of PCBs from the Upper Hudson River in one of the largest and most successful environmental cleanup projects ever undertaken in the United States.

Thirteen years ago, when the Environmental Protection Agency selected dredging, many environmental groups praised the decision. Now, as this historic cleanup draws to a successful conclusion, some say this unprecedented project was not sufficient. They want significantly more dredging ‚Äì beyond what EPA ordered.

EPA has rejected the request three times. EPA has said no further dredging is necessary because the dredging project is achieving its goals of protecting public health and the environment. In the words of EPA Region II Administrator Judith Enck, this project has been ‚Äúenormously successful.‚Äù

For 12 years, EPA studied the Hudson before issuing its final decision in 2002. The agency considered requiring an even larger dredging project, but ultimately determined that a carefully balanced approach ‚Äî bank-to-bank dredging in some areas, targeted dredging in others ‚Äî would reduce PCB levels in fish and protect public health and the environment while minimizing the risk of unnecessary harm to natural resources and disruption for local communities.

‚ÄúGE welcomes the U.S. Environmental Protection Agency announcement of our‚Ä® agreement on a comprehensive study of the shoreline areas of the upper Hudson‚Ä® River, building on the work we have been doing in the river and along the shorelines‚Ä® for many years. This agreement was cooperative and demonstrates GE‚Äôs continued‚Ä® commitment to meet its environmental obligations,‚Äù said Ann R. Klee, GE‚Äôs vice‚Ä® president of Global Operations, Environment Health and Safety.

‚ÄúGE takes great pride in what has been accomplished thus far on an extraordinary‚Ä® series of environmental cleanup projects conducted on and near the Hudson River,‚Äù‚Ä® Klee said. ‚ÄúThe agreement announced today builds on the significant sampling and ‚Ä®interim remedial work GE already has completed in the floodplain. As the‚Ä® environmental dredging project draws to an expected close in 2015, GE‚Äôs work on‚Ä® the Hudson River will continue.‚Äù

To date, GE has sampled more than 3,200 locations along the floodplain. Under the‚Ä® new agreement, GE will continue extensive sampling along 80 miles of Hudson‚Ä® shoreline. Under EPA supervision, GE also will perform human health and ecological‚Ä® risk assessments. Based on the results of these evaluations, EPA will develop and‚Ä® issue a cleanup plan (in a Record of Decision) for the entire floodplain area.

The Company said its completion of the project ‚Äî expected in 2016 ‚Äî will fully resolve its remedial liabilities. Any liability for natural resource damages beyond the cleanup is speculative at best, GE said, because current scientific evidence shows that Hudson River wildlife populations are robust and thriving. Therefore, GE said, it believes no expansion of the dredging project is warranted.

GE has spent more than $1 billion thus far implementing the project selected and overseen by the U.S. Environmental Protection Agency. EPA has said the project is meeting the Agency‚Äôs clean-up goals and protects human health and the environment.

June 4, 2012 ‚Äî EPA has completed a five-year review of the Hudson River dredging remedy. This was the second major review of this project in two years ‚Äî and the second time EPA has reaffirmed the scope of the project.

EPA‚Äôs review concludes that the dredging project ‚Äúwill be protective of human health and the environment upon completion‚Äù and that ‚Äúadditional dredging is not necessary to achieve the ROD objectives.‚Äù

Further, EPA concludes ‚Äúthe ecological goals of the ROD will be achieved with time following implementation of the remedy.‚Äù And, despite claims to the contrary, EPA determined that ‚Äúno other information has come to light that could call into question the protectiveness‚Äù of the remedy.